Making Progress on Rebuilding Our Infrastructure

After a busy few weeks in D.C., I was home last week for the 4th of July holiday. It was terrific visiting folks from Aberdeen to Kingston, from Tacoma to Bremerton, and a bunch of points in between (and getting to spend a little time with my kiddos too). But if you’re like me, there’s one thing you’re tired of spending time doing… SITTING IN TRAFFIC!

With that in mind, I’m excited to share news of some significant progress to address infrastructure needs in our region. Let’s get into the details!

Rebuilding Our Infrastructure and Investing in Our Communities

We know that investing in infrastructure can help put people to work in the near term and lay the foundation for economic growth over the long haul. Plus, there’s no such thing as a Democratic road or a Republican bridge. There are blue, red, and purple districts that need better access to clean drinking water and broadband.

Since my last newsletter, Congress made some major progress—including passing the INVEST in America Act. This comprehensive infrastructure package aims to make transformational investments in highways, roads, bridges, transit, rail, and water infrastructure across the nation. This bill will create good-paying jobs, modernize the nation’s infrastructure, and reduce carbon pollution – plus, it puts some of the key pieces of President Biden’s infrastructure plan into legislation.

Importantly, this legislation included federal funding for a number of initiatives across our region. Let me give you a few examples.

Investing in Underserved Communities in Tacoma

We all want our kids to be safe when they go to school; yet, the City of Tacoma reports that – once every eight days – there is a traffic incident in proximity to a Tacoma school. It’s important to keep our kids safe, so the bill includes funding for “Safe Routes to School” projects near Whitman Elementary and Edison Elementary.

Additionally, the legislation includes funding for the City of Tacoma’s “Links to Opportunity Project,” which aims to improve sidewalks, lighting, and signage on Tacoma’s Hilltop. While Sound Transit is extending light rail to the Hilltop, this project is focused on improvements for all users including pedestrians, cyclists, and others so that the entire neighborhood is seeing more opportunity.

I was thrilled to join Tacoma Deputy Mayor Keith Blocker, Councilwoman Catherine Ushka, and Public Works Director Kurtis Kingsolver for a tour of these projects to see firsthand how these investments will help the community! 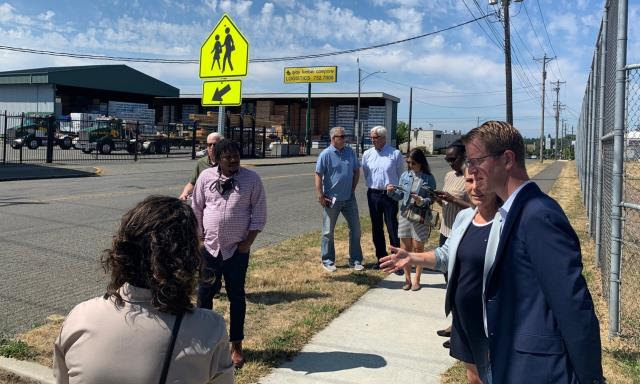 The infrastructure legislation also included funding for two improvements to US 12, which is a major East-West transportation route in Grays Harbor. These improvements will make strides in rebuilding essential infrastructure, reducing congestion, and revitalizing local economies.

Folks who have visited Aberdeen may very well have been stuck in traffic as a train rolls through town. Unfortunately, the lack of rail separation has created congestion, restricted emergency access to the region’s primary commercial area, and exacerbated safety concerns. That’s why I worked to include funding for the City of Aberdeen’s US 12 Highway-Rail Separation Project, which aims to improve the flow of freight and people in Aberdeen. As Port of Grays Harbor Commission President Stan Pinnick said, these investments will “benefit our community for years to come as we continue to work to bring jobs, private investment and opportunity to Grays Harbor.”

The bill also included funding for the replacement of the US 12 Heron Street Bridge, a more than 70-year-old bridge that carries over 14,000 daily trips across the Wishkah River.

It was great to visit last week to see first-hand how these investments will help create more jobs and economic opportunity in our region. Thanks to Grays Harbor Port Commission President Stan Pinnick, Aberdeen Mayor Pete Shave, Hoquiam Mayor Ben Winkelman, and their teams, for the tour! 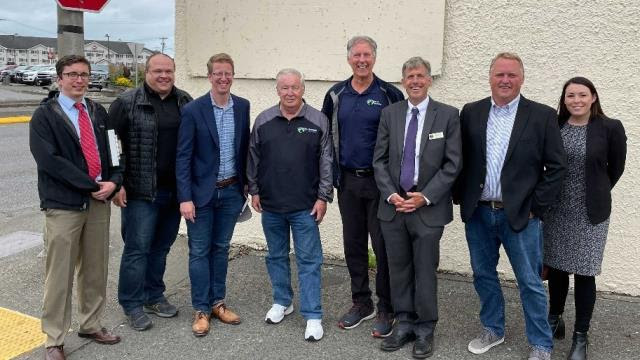 Additionally, the infrastructure legislation included funding to move forward with fixes to the Gorst Corridor. As many commuters into the Naval Shipyard know, the corridor is an enormous bottleneck that keeps people from getting to work or getting home to their families. In addition, the Navy has raised concerns regarding the lack of resiliency at the corridor. And the Port of Bremerton has been pushing for improvements to help economic development efforts near the Bremerton Airport. The funding included in the bill will help ensure WSDOT can make progress in examining the resiliency, mobility, and equity issues in the Gorst area as the State explores improvements. Moving this project forward will relieve traffic congestion, improve safety, provide resiliency from sea level rise and seismic events, and support the Navy’s presence in Kitsap County.

In recent weeks, people in the Pacific Northwest have faced horrific news regarding the potential catastrophic die-off of salmon populations resulting from rising water temperatures from the recent heat wave. Sadly, we know that in our region deteriorating infrastructure and failing culverts have long had a negative impact on water quality and have threatened the salmon that are so important to our economy and identity.

That’s why I’m thrilled that the House passed a bipartisan amendment I introduced to the infrastructure bill to create a new grant program within the U.S. Department of Transportation for culvert restoration – providing a historic investment in critical fish passage and recovery efforts for our region and our country. Having the federal government step up – and pick up some of the tab for these investments – is a big deal.

By establishing the National Culvert Removal, Replacement and Restoration Grant Program and providing dedicated funding for culvert restoration, the federal government can restore fish passages and provide critical access to upstream habitat for aquatic species, including our salmon.

I spoke about why this effort matters for our region on the House floor: 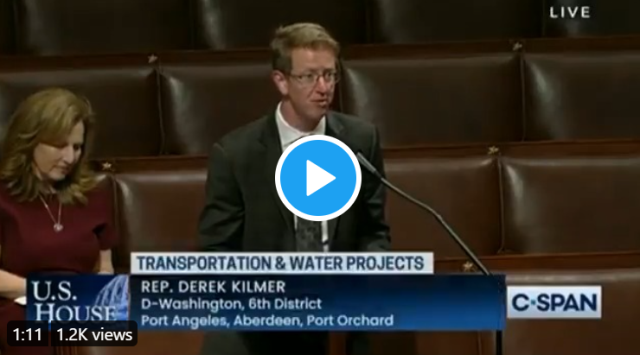 I’m grateful for Senator Cantwell’s partnership on this effort and for the support bipartisan members from across the Pacific Northwest who know how important this effort is to protecting clean water and recovering salmon populations in our region. I’ll keep working to get this signed into law!

Speaking of salmon recovery… If you read the last newsletter, this headline may be inducing déjà vu … but there’s been even MORE good news on the effort to recover Puget Sound!

In the last newsletter, I announced that the House passed the PUGET SOS Act – legislation I introduced with Rep. Marilyn Strickland. The bill will ensure the federal government is the strong partner that our region needs to make real progress in recovery and restoration efforts by establishing a Puget Sound Recovery National Program Office in the Environmental Protection Agency.

And this week, I’m excited to announced that when the House Appropriations Committee passed the Interior and Environment Appropriations bill, I secured a more than 30% increase in federal funding for Puget Sound recovery. This funding will support state, local, and tribal government projects to improve water quality, protect shorelines, and enhance fish passage and salmon habitat. This historic funding increase will assist efforts to restore salmon and orca populations, ensure future generations can dig for clams, and uphold tribal treaty rights.

We know that Puget Sound is an iconic body of water that is critical to the environmental and economic future of our region. Generations of our friends and neighbors have built their lives and made livelihoods on the Sound – and if future generations are going to have those opportunities, we’ve got to protect and restore the Sound. I’ll keep at it! 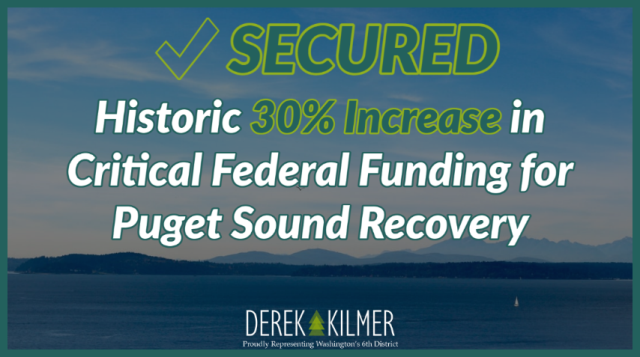 It was great to check in with the awesome teams at WorkForce Central and its Pierce County Community Engagement team to talk about how we can continue to work together to grow jobs, build a 21st century workforce, and create more economic opportunity for folks in our region. Special congratulations to Cami Feek – WA State's newest Employment Security Department Commissioner! Count me on the home team. 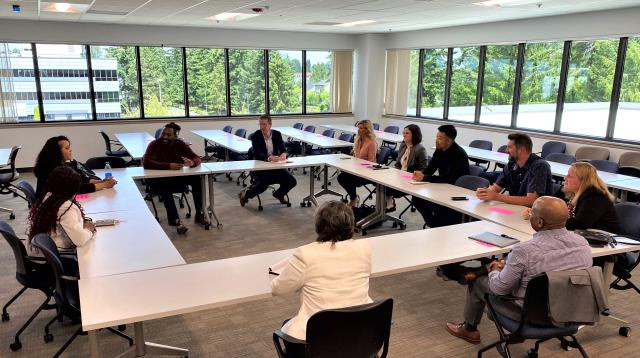 I was honored to join Mayor Victoria Woodards, Pierce County Councilman Ryan Mello, Troy Christensen from the Rainbow Center, and dozens of others for the raising of the PRIDE Flag in Tacoma. We also got to honor some extraordinary people who are contributing to the effort to ensure equality for the LGBTQ+ community. Congrats to all who were honored! 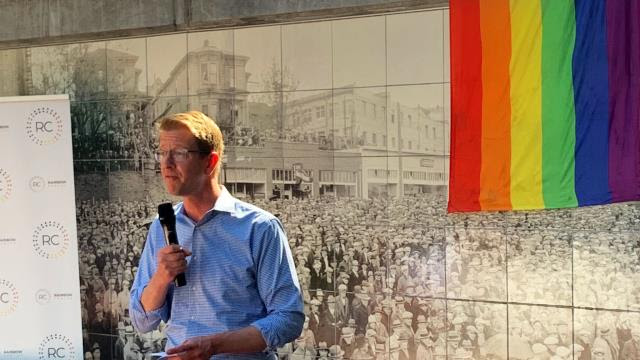 Celebrating America!
It was terrific spending my 4th of July in Kingston – serving coffee at the annual pancake breakfast at the Kingston Yacht Club and participating in the longest running Fourth of July Parade west of the Mississippi! Thanks to everyone for the warm welcome! 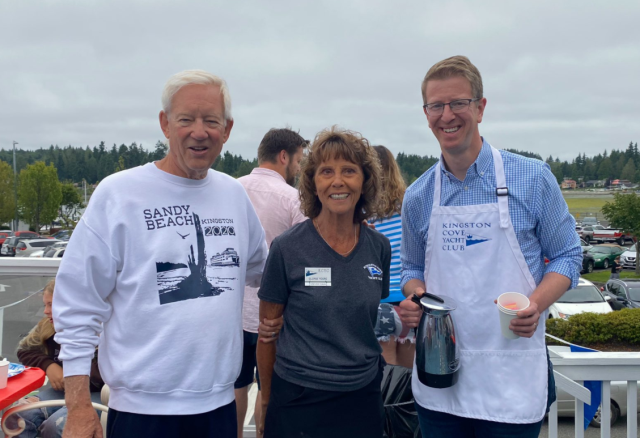 OK – that’s it for now folks. As always, I’m honored to represent you.